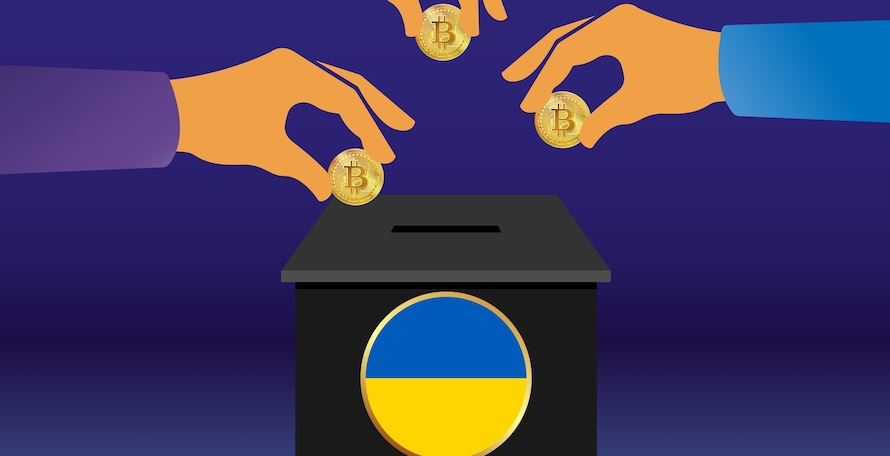 On 1 January 2022, a few memes poked lighthearted fun at the percolating paranoia that the new year would herald in “2020 too”, a repeat of the year that changed life as we know it on Earth. Only 2 months into the new year, as the ultimate sporting event celebrating humanity–the Olympics–wrapped up, the smiles began to turn into grimaces as the jokes turned prophetic. A new sinister global threat was being confirmed: this time, the specter of Russia’s president Putin invading its democratic neighbor the Ukraine.

By March, after finally breaking free from the shackles of a 2-year pandemic that has left grief, devastation, isolation, spiraling inflation, unseen money printing and skyrocketing traditional and crypto markets, there was no doubt anymore, we’re in for another very tough year.

Russia, which has invaded Ukraine with ruthless force, has met with fierce resistance, and been largely booted from the global financial system for its troubles. The effect on global markets since has been devastating, with the crypto industry and its risky nascent assets taking the brunt of it in many aspects.

Crypto has been a part of the story at almost every turn. Following blanket bans and sanctions aimed at freezing the Russian economy by banks from Singapore to the EU, SWIFT, Mastercard and Visa, many feared that the country’s businesses and citizens would turn to Bitcoin and other cryptocurrencies to escape sanctions.

While this initial speculation caused a surge in the price of Bitcoin last week, reality quickly set in. Those in the know say this is unlikely. The Russian economy is too big, and crypto too illiquid and transparent, to make this a reality, a reality that would be very detrimental to crypto by way of regulation in the long run.

Never say never though. After all, it was in early February that Russia and Putin did a big u-turn on crypto regulation, suddenly embracing it. In hindsight, it now makes sense.

At the same time, the crypto space began to assemble by itself, with a global peace corps of volunteers and investors sending financial support directly to Ukranians in response to the tragic humanitarian crisis unfolding.

Ukraine has managed an impressive fundraising drive both for its military as well as civilian relief efforts, yet this has not been without complications.

In this article, we’ll take a more hopeful look at how crypto has played a part in the unfolding saga, with an emphasis on how it has been of benefit to the under-siege nation of Ukraine rather than the threat of Russian sanction evasion.

How is crypto being used to help Ukraine?

Funds have been pouring into Ukraine at an astonishing rate, with many people from around the world rallying behind the country. Listed below are some of the institutions and methods that have been driving this trend.

Like many countries in recent years, Ukraine has founded a digital ministry to aid its transition to more streamlined governance. With a law passed legalizing digital assets, Ukraine’s digital ministry and central bank have been in the process of trying to create a central bank digital currency (CBDC), the e-hryvnia, which was supposed to launch in late 2022. That initiative has been de-emphasized for now, with the ministry instead focusing on soliciting crypto donations to bolster the war effort.

As of March 2nd, the ministry had already raised $46.7 million in cryptocurrencies such as Bitcoin and Ethereum, as well as Solana, Polkadot, Tron, and even Dogecoin – with over 96,000 donors having taken part. When paired with donations received by Ukrainian NGOs, that number goes up to over $54 million.

Crypto leaders speak out and donate

High-profile figures like Ethereum’s Russian-born Vitalik Buterin, who has been incredibly vocal about his opposition to Putin, Polkadot founder, Ethereum co-founder Gavin Wood, who gave $5 million in DOT, and Tron’s former head Justin Sun have been helping to lead the way, condemning the invasion while offering financial support.

Everyday people do their bit as well, such as a Russian woman living in the United States who minted an NFT of her burning her passport and donated the proceeds. On Crypto Twitter, the usually toxic social media landscape’s political divide is notably less pronounced, with most users condemning the invasion, arranging funding and resources, and contributing to fundraising through initiatives like the NFT auction, Art Against War.

According to Time, the Ministry of Digital Information has been extremely efficient, converting all crypto donations into Bitcoin, stablecoins and Ether which it then uses to buy medical supplies, food packages, night vision devices and more. Around 2 in 5 European and US suppliers are willing to take crypto directly, while the others accept USD and Euros which have been converted from crypto.

Crypto exchanges like Kuna also help, with most of the donations in smaller cryptocurrencies received getting converted to Bitcoin and ETH. The fungibility and liquidity of crypto assets and 24/7 efficiency of crypto exchanges ensure that nearly any crypto asset can ultimately be transformed within a matter of minutes into a blue-chip digital asset which in turn can immediately be converted to much-needed fiat currency. However, this doesn’t really happen, with the bulk of the crypto being sent to hardware wallets with multi-sig features to enhance their cold storage.

As markets go increasingly bearish, the Ministry remains bullish in their efforts, claiming that $100 million in donations is only days away.

After announcing an airdrop for all of the crypto users who had donated to the country, Ukraine walked back the offer on March 3, most likely to prevent incentives for war profiteering. Indeed, an impostor token called Peaceful World popped up after the announcement, minting 7 billion tokens it claimed were from the government.

Furthermore, while the donations had been pouring in steadily to the ministry at a rate of hundreds per hour since the war began, after the initial announcement of the airdrop, that rate jumped into the thousands. On top of this, the presence of many new wallet addresses indicated that individuals were trying to game this system to receive multiple rewards.

CoinDesk labeled this the worst aspect of crypto, pointing out that many of the would-be war profiteers may have shot themselves in the foot, as the record of their creepy moves will be visible on the blockchain for all time. One Twitter user even described the digital ministry’s about-face as “the best rug ever.”

The ministry later said that it will instead be issuing NFTs likely to be used after the war for the funding of a museum rather than for the armed forces.

Shortly after the start of the war, Russian dissident artist collective Pussy Riot launched UkraineDAO, which was able to raise $3 million in one day and had taken in almost $7 million as of March 7. The decentralized autonomous organization (DAO) is minting 10,000 non-fungible tokens (NFTs) of the Ukrainian flag on the Ethereum blockchain, and these are being donated to NGOs in the country such as Come Back Alive for relief efforts.

Will Russia be able to use crypto to outmaneuver sanctions?

With crippling sanctions in place on the Russian economy that have caused the rouble to lose nearly half its value, many are wondering if the country will turn to cryptocurrencies to help manage its moribund finances. As the threat of widespread oil and gas embargo continues to loom, people are especially concerned crypto might be used to help fund the sector funding the invasion.

Although there are indeed Russians benefiting from the existence of crypto at the moment and spiking the price of Bitcoin, these are more likely to be ordinary folks trying to hang on to what they have amid a worsening situation than oligarchs liquidating their yachts, or state-run enterprises shifting their entire businesses into the digital realm. Regulations such as FATF’s Travel Rule, which requires exchanges to disclose originator and beneficiary data on transactions exceeding $1,000, as well as the relatively limited liquidity of crypto, which has a market cap of about $2 trillion, mean that crypto just isn’t big enough to accommodate what Russia would need it to do.

As this horrific war continues to play out on the European continent, crypto has unavoidably been a part of it – just as it likely will be of all future wars as well. While many politicians have been calling for regulators to seize the moment and pay closer scrutiny to crypto, it seems that at least for now, the built-in neutrality of crypto has been on the side of the angels.

Crypto also appears a natural fit for humanitarian fundraising when weaponized through clever PR and marketing across the all-encompassing worlds of social media and the Internet.

Crypto offers respite to the most vulnerable on both sides of a war. Digital currencies have allowed the civilians in Russia to have a bit of breathing room, while USD supplies run out and the rouble continues to plummet. Exchanges such as Binance and Coinbase are rejecting calls for them to pull out of the country and freeze user accounts. For how much longer though, no one knows. Binance CEO Changpeng Zhao lamented the focus on crypto in the following tweet:

At the same time, it is helping to fund the defenders of a country under invasion by an autocratic power. Let’s hope digital assets and those who hold influence over the direction of the crypto sphere can continue to walk this tight rope. Indeed, some pundits on social media have made a compelling argument that this Ukraine conflict is proving the ultimate use case for cryptocurrencies.

With millions of refugees leaving everything behind as they flee to safe havens, undertaking a long and perilous journey where any physical items of value or cash and bank cards might be taken from them by force, crypto at least provides them a fair chance to take some of their wealth safely across the border. All that is required is that they access their crypto wallet, which can be readily available on their mobile phones, and remember their access credentials–with CYBAVO’s Wallet app, this is as easy as a 6-digit PIN Code!

If you would like to support crypto donations to Ukraine, you can learn more here. Stay up to date by following Ukraine’s official account, where they post official crypto addresses for donations.

Please be careful to avoid scams and verify that you’re using a legitimate source and address, as there are likely hundreds of fake accounts and addresses in the comments section.