Will Crypto Save The Metaverse and Make it Decentralized? 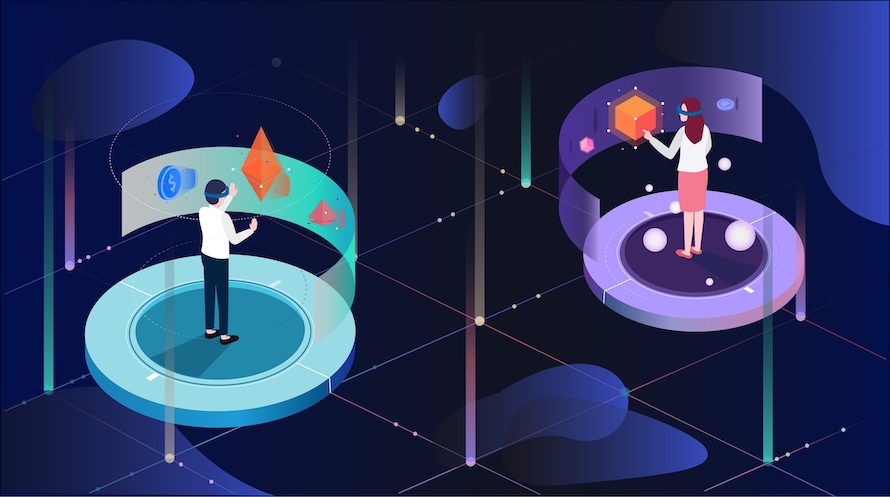 It’s late 2021 and the major trends for the next year have already been established: Play-2-Earn gaming, Web 3.0 and of course the coming metaverse, a supposed digital utopia set in virtual reality. With the new Matrix movie out after a 20-year absence, playing to a vastly new generation of web users, it will also help raise discussions about where our digital world is heading to and how aligned it is from the original vision of its creators like Tim Berners-Lee.

Growing acceptance of DeFi applications have already led many users away from Traditional Finance (TradFi) and revolutionized the way people interact with financial instruments. Now, Web 3 and metaverse crypto projects are set to meet with the gatekeepers of the Web 2 Internet and eCommerce, in what could become an important decision for the future of the online realm and all its users.

In short, it’s a battle between a continuation of the status quo (a centralized system) where the biggest players reap all the data and rewards, or a decentralized web where users constitute the network, allowing them to set the rules, control their data, control their digital identities.

The term ‘metaverse’ comes from Neal Stephenson’s 1992 science-fiction novel Snow Crash. In the book, the metaverse is a free and decentralized innovation under threat of being taken over by an evil corporation. Seeing how today’s internet giants have started building on the metaverse, it looks like the ‘decentralized’ aspect of the book might be skipped in our version of the metaverse, and we’re heading straight to corporate walled gardens. That being said, a decentralized metaverse is still possible – and cryptocurrency will play a key role.

What Is the Metaverse?

The metaverse is somewhat complicated, but it can be understood as an evolution of the internet. Rather than communicating using video or phones, people can wear virtual reality headsets and communicate through digital avatars. These avatars can be used in games, for virtual gigs, work, or just about anything else. The main purpose of the metaverse is to provide a blended experience of real life and digital life.

If the metaverse comes to pass, any company that invested in digital real estate in the early days will have a significant first-mover advantage. One company in particular is in a position to do just that.

Why Does the Metaverse Need To Be Decentralized?

Let’s take a look at a company that has emerged as a key driver of the metaverse: Meta. Under Meta’s former name (Facebook),  the “walled garden” was the chief strategy, due to Facebook’s attention-focused business model.

All of Facebook’s apps were designed to attract user eyeballs and show them ads. To ensure that there are as many eyeballs as possible, Facebook relies on the network effect – i.e., if your friends aren’t there, what’s the point?  Conversely, if your friends leave the platform, then there is less reason for you to be there, reducing the number of eyeballs on Facebook. Thus, Facebook is highly motivated to keep its users in a walled garden.

An example of this was the company’s foray into providing “free” internet in India. The project was described by Facebook as a mission to connect the unconnected, those who did not yet have access to the internet. However, there was another important goal: the free internet would have Facebook at its core. As a stand-in for the internet, new internet users would have to access everything through it’s walled garden.

Facebook’s rebrand as Meta is Zuckerberg’s more ambitious attempt at replicating this walled-garden strategy. It can be broken down into a few steps:

The notion that one company could exert such influence over the next iteration of the internet is in stark contrast to the expectations many hold for the future of the Metaverse.

Will Crypto Be the Hero To Liberate the Metaverse?

In an ideal world, a metaverse would be heavily decentralized: a web of creatives, businesses, and people all interacting on a broadly level playing field. It should be possible to jump from a digital art exhibition into a meeting with colleagues without needing to change hardware or hand over the valuable personal data to corporations.This ability would require a singular method of exchange that allows for public verification of ownership, or access, to specific places.

The key to realizing this vision is cryptocurrency.  2021’s explosive NFT space showcases how cryptocurrencies can be this great unifier.

As a public ledger that can be securely accessed by anyone who needs it, it should be possible to use blockchain technology as a way to ensure that item ownership or access is tracked across different platforms and spaces.

The metaverse isn’t simply a theoretical conversation. Existing metaverse platforms are already toying with this concept. One of the best-known is Decentraland.

This platform looks a little like VR chat but the difference is that all the content on the platform is created and owned by its users. Users can vote on how the project works and they can earn money by creating and sharing content on the Decentraland platform.

There will likely be more projects like Decentraland in the near future that will open up access to alternative ways for us to interact in the metaverse.

However, given that corporations like Meta seem to have fully committed to the metaverse, we expect to see fierce competition and innovation before the metaverse is fully realized.