A Guide to MetaFi: Infrastructure for the Virtual Economy 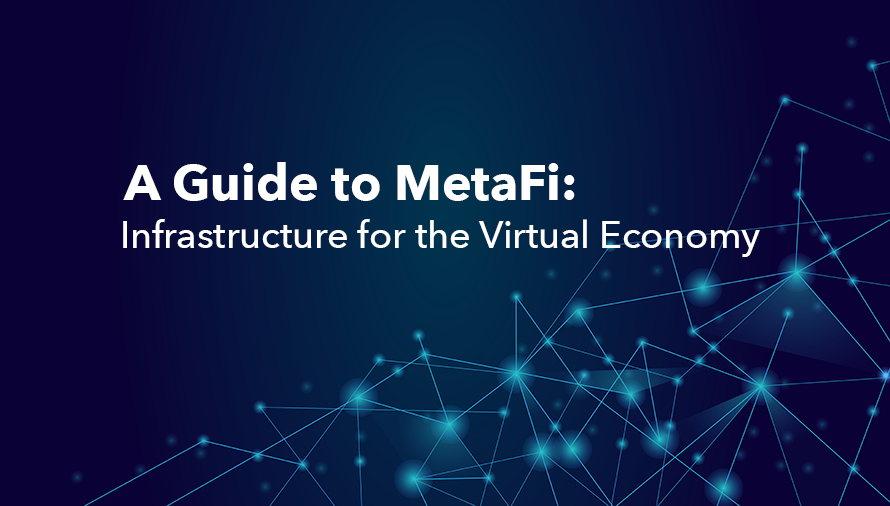 The crypto industry has witnessed an incredible transformation since Ethereum heralded in the era of the smart contract blockchain in July 2015. Since then, the advent of ETH and a new generation of layer-1 networks have slowly moved the cryptocurrency space away from a Bitcoin-maximalist ideology. Unlocking a new world of use cases for digital assets through decentralized applications (dApps), this quiet revolution went full fledged in 2020 with the so-called “DeFi Summer”.

Since then, new sub sectors coming to prominence after decentralized finance (DeFi) include non-fungible tokens (NFTs) in 2021, and for 2022, an arms race to conquer the new digital arenas of Web 3, GameFi, SocialFi, and now also MetaFi. These hyped new niches are converging with traditional tech companies like Facebook and Microsoft, bringing in a lot of fresh capital into the space. However, while the pace of blockchain adoption is accelerating, the lack of a unifying standard for all facets of the technology creates a lot of interoperability challenges.

The virtual economy needs a more interconnected infrastructure. After all, Web 1 uses TCP/IP, while Web 2 has AJAX. Similarly, blockchains cannot become the future of the Internet if decentralized networks remain fragmented.

The term MetaFi was recently coined by Binance to emphasize the world’s biggest exchange’s push to build the infrastructure for the virtual economy. However, the point of MetaFi is to collaboratively create a standard that is universally accepted by most major blockchain networks; hence, Binance can’t go at this alone.

MetaFi, which combines the words “metadata” (not metaverse!) and “DeFi” is the amalgamation of the most cutting edge technologies of the crypto industry. It’s aimed at standardizing large-scale blockchain applications, including games, metaverses, and social media, with the goal of ushering in a new era of unprecedented interoperability among different platforms.

Metadata refers to that which contains information on other data, which helps identify the features and properties of the underlying information being described. Blockchain transactions have metadata; for instance, the kind belonging to an NFT stores its actual content and other parameters, such as “traits.”

DeFi, on the other hand, is a nascent financial technology powered by the same distributed ledgers used in cryptocurrencies and dApps. The most popular ones include Uniswap, Curve, and Lido, and these platforms give anyone permissionless access to financial services.

Note that most, if not all, crypto applications have some DeFi elements to them, whether they be blockchain games, social media platforms, virtual economies, etc. And all crypto transactions contain metadata, which could one day become the glue that connects all dApps together. Think of MetaFi as the foundation for connecting different siloed networks in order to create a wider ecosystem of dApps. The goal of MetaFi is to boost the adoption of Web 3 and blockchain technology to further expand their use cases.

MetaFi can massively impact the potential of dApps in various ways once it fully matures. Here are some of its probable use cases.

With MetaFi, we can potentially build marketplaces that can list every single asset type that can exist in various chains, further enhancing the user experience of collectors who can access all NFTs in a single interface, thereby making the exchange of assets more convenient and efficient.

Fan tokens are minted by sports clubs or fan clubs in order to give holders exclusive privileges and perks. Chiliz is currently the leading marketplace for fan tokens, but there are several exchanges like Binance, as well as a few up-and-coming fan token platforms, like Candy, that aim to compete.

MetaFi can streamline the process of minting, buying, and selling fan tokens if standard metadata for the different tokens and platforms is set in place. Currently, the method and costs of creating and trading them can vary depending on the blockchain and platform.

Instead of sitting idly in wallets, NFTs can be put to work by using them as collateral to take out crypto loans, allowing you to renew the loaned assets at a higher rate, which earns you profits. The functionality of these NFTs may vary depending on the issuer. For example, some NFTs can be rented out to others to be used in games or to access exclusive databases that they otherwise could not afford.

The long term goal for most metaverse concepts is to create multiple and persistent shared interfaces where users can consume various experiences together and interact with each other for different purposes, whether it be to socialize, trade, or play games. However, interoperability will likely become a significant issue once these virtual worlds come to life, similar to what happened with DeFi during its early days, where fragmented decentralized exchanges (DEXs) failed due to lack of liquidity and trading volume.

Initially, we might face the same circumstance with metaverses. For example, a virtual world supported by one game can’t easily connect to a social network. With MetaFi, apps supporting their own virtual worlds can frictionlessly and reliably interact with each other. MetaFi also enhances the functionality of digital assets and virtual tokens, enabling use cases beyond their native virtual worlds.

The Challenges of MetaFi

At present, there are many factors that are in the way of building the aforementioned unified standard. Let’s explore some of them.

When we think of the next stage of the Internet, we envision an immersive 3D and AI-powered interface that makes consuming information and interacting with others more convenient. Unfortunately, as of today, we are still a few years from building the infrastructure for that kind of new Internet. The software and hardware requirements, including the VR/AR capabilities, AI advancement, as well as blockchain scalability and security, are quite difficult to tackle and will take some time before they are ready for global mass consumption.

The only thing we can do is allow blockchain developers to keep building and advancing their protocols, as technologies from other related industries (AI, VR/AR, Web 3) also need time to mature.

Perhaps the main reason why MetaFi was introduced in the first place is also the greatest challenge it faces. When we talk of interoperability, we look at the ability of an application to see, access, and share information across different platforms and blockchain networks, which would allow for multiple complex functions to be performed conveniently and transparently.

Layer-1 blockchains like Ethereum, Cardano, Solana, Polkadot, and NEAR tend to create their own frameworks for their respective ecosystems. The fact that they are built with different programming languages makes it even harder to reconcile them. And while some protocols are putting in the effort to make their networks universally interoperable, more can be done in the collaborative creation of a unified metadata standard for different blockchains and dApps.

Judging from the rise and fall of many projects in the GameFi and DeFi sectors, it appears that the tokenomics and holder incentives need to be properly aligned to allow for long-term sustainable growth. If we don’t solve this problem before MetaFi evolves, price dumps might become even more brutal, as the technology makes markets even more efficient.

The possibilities that might come with a unified ecosystem of dApps are boundless, as this would allow all the different innovations in the space to converge, expanding current use cases and supporting greater adoption.